How to Fight a Restraining Order in New Jersey 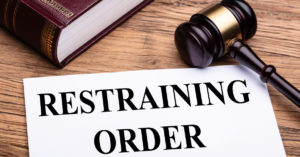 If you are the target of a temporary restraining order issued by a New Jersey court, you need to act quickly to try to stop a temporary order from becoming a final restraining order. Unless you fight the restraining order, a judge’s final protective order could limit your access to your home and children, deprive you of personal possessions and require you to pay child support.

You should immediately seek experienced legal guidance if you face the threat of someone seeking a restraining order against you. The Law Office of Jason A. Volet in Freehold, NJ, can help you fight the allegations against you and urge the court to deny the request for a final restraining order that limits your freedom.

Contact the Law Office of Jason A. Volet today at 732-491-8477 to learn more about how we can protect your rights.

A restraining order, sometimes called a “protective order,” is a judge’s decree for one person to avoid contact and stay away from another. In New Jersey, restraining orders are issued in response to allegations of domestic violence. They are meant to protect the alleged victim of domestic battery by putting restrictions on the alleged perpetrator, or defendant.

Most requests for temporary restraining orders (TROs) are granted. If a law enforcement officer arrests someone on domestic violence charges, he or she can request a TRO against the defendant. An alleged victim of domestic violence must present some credible evidence of having been assaulted or threatened when asking for a protective order.

Once a TRO has been issued in New Jersey, a police officer must promptly serve the order on the defendant. The officer is required to seize all weapons in the defendant’s possession along with any permit or license allowing the purchase of a gun or firearm.

At the judge’s discretion, a TRO may require that the defendant:

After the court grants a TRO, it schedules a hearing within 10 days for a judge to decide whether to make the temporary restraining order a final restraining order (FRO). An FRO is effective for up to a year and can be extended afterward.

A defendant will be notified of the hearing. It is imperative to retain an experienced defense lawyer and attend the hearing to oppose an FRO.

What are the Penalties for Violating a Restraining Order?

It is imperative to abide by the restrictions of a TRO or FRO issued in your name. Violating a restraining order is considered contempt of court, a fourth-degree offense punishable by up to 18 months in jail and a fine of up to $10,000.

If you willfully violate a TRO in a violent manner or in a manner that can be interpreted as threatening, you can expect that the petition for a final restraining order will be granted. Restraining order violations may also weigh against you if you face domestic violence charges such as harassment or stalking. Any violations will certainly be cited if the petitioner seeks renewal of an FRO.

How We Can Help You Fight a NJ Restraining Order

While obtaining a temporary order is almost automatic, the petitioner faces a burden of proof to obtain a final restraining order. This includes demonstrating to the satisfaction of the judge that:

If the petitioner cannot prove these three elements, the judge is required to lift the TRO. As your defense attorney, Jason Volet will challenge the evidence the petitioner presents and seek to raise a reasonable doubt in the judge’s mind.

Domestic violence cases are typically he-said-she-said cases without witnesses. If the petitioner’s testimony in the FRO hearing does not match initial allegations made to obtain the TRO, Mr. Volet will challenge this discrepancy.

Ten days after a highly emotional incident, a petitioner’s recollections could easily lead him or her to embellish the facts or even to walk back previous allegations. Jason Volet will cross examine the petitioner and challenge the authenticity of any physical evidence presented, such as photos or emails, as feasible.

If there are witnesses, Mr. Volet will challenge inconsistencies in any testimony against you and present witnesses with testimony that supports your version of what happened.

In a domestic violence hearing where the facts call for it, the defendant may make a statement of remorse and agree to such conditions as attending anger management classes and/or other counseling. This can support a court’s decision to lift an FPO or issue a final order with fewer restrictions.

Attorney Jason Volet is a skilled and compassionate negotiator experienced with domestic violence cases of all kinds. He can reach out to your petitioner, if appropriate, to discuss the impact of an FRO on your life – and your children’s lives – and seek an alternative resolution to the complaint against you.

If the judge issues an FRO against you, we will immediately begin to explore whether there were errors made during the hearing to serve as a basis for your appeal. We would have 45 days to file an appeal.

In summary, Jason Volet will make sure your side of the story receives a fair hearing. He will closely examine all evidence against you to expose its shortcomings before the court. Because of his experience as a New Jersey domestic violence defense attorney and the professional relationships he has in Freehold and Monmouth County courts, Jason A. Volet can ensure you are fairly heard. He will fight to obtain the best possible resolution to your case.

Ranking as the country’s top property crime, shoplifting is a serious concern in the United States. Shoplifting results in more than $20 billion dollars in property loss annually for U.S. retailers. Because of the sheer number of thefts and revenue…