What Happens at a Final Restraining Order (FRO) Hearing? 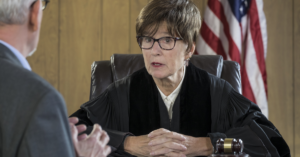 The plaintiff bears the burden of proof on both elements and must present evidence and witnesses in support of his or her claim for an FRO. A plaintiff must meet the “preponderance of the evidence” burden of proof. In other words, he or she must prove it is more likely than not that the allegations are true. You will have the opportunity to review the plaintiff’s evidence and cross-examine witnesses. You will also have the opportunity to present evidence and witnesses of your own, whom the plaintiff may also choose to cross-examine. If the judge finds that the plaintiff has met his or her burden of proof on both elements, the trial court will issue the final restraining order. You should not go into an FRO hearing without an experienced attorney on your side. If you have an FRO issued against you, you will be fingerprinted and listed on a domestic violence registry. You will also lose your right to carry a firearm. Schedule a free, confidential case evaluation with a domestic violence attorney from The Law Office of Jason A. Volet to learn more about your legal options now.

How Long Does a Final Restraining Order Last?

An FRO lasts until the victim either requests the court lift the order, or the defendant files an application to terminate the order and proves that the FRO is no longer needed for the plaintiff’s protection. In both cases, the court will likely order a hearing to determine whether to lift the FRO.

What Happens If the FRO Is Violated?

A defendant who violates an FRO may do so inadvertently, or he or she may violate the terms of the order in response to contact from the plaintiff. If you have an FRO entered against you, you should remember that the FRO is the court’s order, not the plaintiff’s order. So you should ignore any efforts by the plaintiff to initiate contact with you, as responding to those efforts constitutes a violation of the FRO. If you violate the terms of your FRO, you can be charged with criminal contempt, which is normally charged as a disorderly persons offense. However, if you are accused of committing a separate criminal offense while violating the FRO (such as stalking or harassing the plaintiff), you can be charged with a fourth-degree crime. You can also be charged with the separate criminal offense.

Can a Person Go to Jail for Violating a Final Restraining Order in New Jersey?

Yes. Criminal contempt for violating an FRO can result in a disorderly persons conviction that can carry a sentence of up to six months in jail. If you committed a separate criminal offense in violating your FRO, you can be convicted of a fourth-degree crime, which carries a potential sentence of up to 18 months in prison. You could face additional penalties if you are convicted of the separate criminal charge. Many domestic violence crimes are charged as third- and second-degree crimes, which carry sentences of three to five years and five to 10 years, respectively.

Can an FRO Be Appealed?

Yes. If you believe that the trial court committed an error of fact or law in issuing a FRO against you, you have the right to appeal the trial court’s decision to the appellate division. In addition, after time has passed and you believe the plaintiff no longer requires an FRO for protection, you can file an application with the issuing court to have the FRO lifted.

Does an FRO Show Up on Someone’s Record in NJ?

Yes. Once you have an FRO issued against you, you will be fingerprinted, and your information placed into the state domestic violence registry. This registry is accessible by a wide variety of law enforcement agencies and background search services. As a result, having an FRO issued against you can impact your ability to secure employment or housing and cause delays and issues with travel, especially at the airport. If you’ve had a final restraining order taken out against you and you have questions about your rights, obligations, and legal options, contact The Law Office of Jason A. Volet today. Our restraining order attorney can review your case and answer your questions in a free and confidential consultation.

Typically, law enforcement officers in New Jersey must obtain a warrant before they can search a person or a person’s property. However, an exception exists for automobiles. Police officers do not need a warrant to make a traffic stop or…