What Are the Fines and Prison Terms for Aggravated Assault in New Jersey? 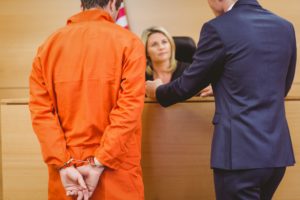 A conviction for aggravated assault can also follow you through life as you search for a job, pursue an education or look for housing. Your future and your family’s future could be in jeopardy.

Here, we take a closer look at the possible fines and prison terms for aggravated assault in New Jersey as spelled out in N.J.S.A. 2C:12-1(b). Remember: An arrest does not automatically result in a conviction. With help from an experienced criminal defense attorney and former prosecutor such as Jason A. Volet, you can fight the charge and fight for your future. Contact us today to discuss your case.

If you are convicted of a second-degree crime in New Jersey, you face a potential fine of up to $150,000 and a prison term of five to 10 years. Additionally, under the No Early Release Act (NERA), you must serve at least 85 percent of your sentence before you can be eligible for parole. To prove you are guilty of second-degree aggravated assault, a prosecutor must prove that you did any one of the following:

As you can see, when you are dealing with an aggravated assault charge, it will be important know the difference between three types of injuries:

An experienced New Jersey criminal defense attorney will know how to look at the medical evidence in a case. For instance, a prosecutor may be forced to drop an aggravated assault charge to simple assault if the evidence shows that the alleged victim suffered only a bodily injury and not a significant or serious one.

A conviction for a third-degree crime in New Jersey carries a possible fine of up to $15,000 and a prison sentence of three to five years. Many types of aggravated assault charges fall into this category. To convict you of third-degree aggravated assault, a prosecutor must show that you did any one of the following acts:

Additionally, you can face a third-degree aggravated assault charge if you commit a simple assault that causes bodily injury to any one of the following while they are performing their professional duties:

If the simple assault on of those workers does not result in bodily injury, then it is a fourth-degree crime.

If you are convicted of a fourth-degree crime in New Jersey, you can face a fine of up to $10,000 and a prison sentence of up to 18 months. For a fourth-degree aggravated assault charge, the prosecutor would need to prove that you did any one of the following:

Attorney Jason A. Volet is a former Monmouth County criminal prosecutor who now aggressively defends those who have been charged with serious crimes such as aggravated assault. Over the course of his career, he has successfully handled more than 2,000 criminal cases. He can go to work for you today.

Aggravated assault carries serious consequences. You need to begin your defense immediately. So, don’t wait to get help from The Law Office of Jason A. Volet. Call or reach us online now for a free and confidential consultation.

Felonies are serious criminal charges that typically arise when a person faces repeat convictions or when severe injuries or damages result from a person’s actions. In many states, repeat offenders for drunk driving are often charged with felony DWI. However,…