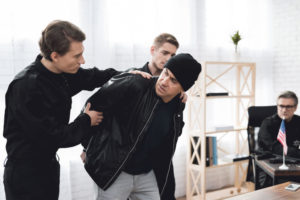 Resisting arrest is a serious charge in all states, and New Jersey is no exception. Anyone convicted on charges of resisting arrest could face criminal charges and more serious consequences than they might have under the original circumstances of their arrest.

So, what should you do if you have been accused of resisting or eluding arrest? While every case is different, your first step should be to contact an experienced New Jersey criminal defense attorney.

As a former criminal prosecutor turned defense attorney, Jason A. Volet understands both sides of criminal cases and uses that knowledge to pursue the best possible outcomes for clients across New Jersey. Through his exclusive devotion to criminal defense, Mr. Volet has developed refined techniques and strategies that can make all the difference in your case.

To learn more about how our New Jersey resisting arrest defense attorneys can help with your unique situation, call us anytime, 24/7 for a free confidential consultation.

What Are the Charges for Resisting Arrest in NJ?

No matter the circumstances surrounding your arrest, it is illegal to resist or evade arrest by a law enforcement official. If you try to flee, stop a police officer from executing a lawful arrest, give an officer the impression that you are trying to resist, or create the risk of injury for arresting officers, you could be subject to additional charges.

In New Jersey, the least serious charges for minor or peaceful instances of resisting arrest could result in fines of up to $1,000 and 6 months’ jail time. If you are charged with running away from the scene of your arrest, you could face up to 18 months in prison.

If you use force, violence, or the threat of force or violence against an officer, or create the risk of injury to an officer, this is a more serious crime punishable by up to 5 years in prison.

It’s important to note that New Jersey does not prosecute individuals for resisting arrest by non-law enforcement officials, such as private security guards. However, while you can’t be charged with resisting arrest by a private citizen, you could still face assault charges if you end up in a violent altercation as you resist.

Is Resisting Arrest a Misdemeanor in New Jersey?

In New Jersey, minor or peaceful cases of resisting arrest are usually classified as disorderly persons offenses. However, individuals who attempt to flee custody or otherwise leave the scene of their arrest typically have their charges elevated to a crime of the fourth degree, equivalent to the least severe felony charges in other states.

If an officer in a motor vehicle pursues you while you are driving and indicates that you must stop, you may be charged with a crime in the third degree if you refuse to pull over. If you resist arrest in any way that puts a law enforcement officer at risk of bodily harm, your offense will likely be charged as a very serious crime of the second degree, which could result in years of prison time if you are convicted.

Per The New Jersey Code of Criminal Justice, the offense of resisting arrest is defined as intentionally preventing public servants from executing lawful arrests or other official functions. To successfully prove charges of resisting arrest, the State is required to demonstrate beyond a reasonable doubt that three key elements exist:

What If the Original Underlying Charges Were Dismissed?

Generally speaking, charges associated with resisting arrest stand independently of any other offenses, including any underlying offenses that led to your arrest. Even if those underlying charges are later dismissed or your arrest was made unlawfully, you may still be convicted on charges of resisting arrest.

However, there are two main exceptions that may offer valid defenses for those charged with resisting arrest:

If you are facing a disorderly persons offense or more serious criminal charge related to allegations of resisting arrest in New Jersey, you need a fearless and aggressive advocate in your corner. Criminal prosecutors in our state are tough, so you should never settle for less than the representation you deserve.

At The Law Office of Jason A. Volet, our talented legal team has more than 15 years of experience handling all types of charges throughout New Jersey. We’re standing by to take immediate action in your case. Call us or contact us online to schedule your free and confidential initial case review now.

If you’ve been pulled over in Freehold, New Jersey by a police officer while driving a car and he suspects that you’ve been driving while intoxicated, the first thing that that officer will do is ask you to step out…