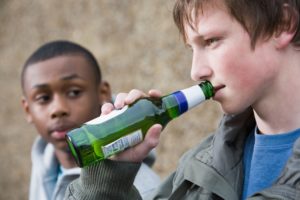 Possession of Alcohol Underage in NJ Results in a Fine

Most people know that the legal age to consume alcohol in New Jersey is 21. If a person under the legal drinking age, or a “minor,” is caught holding or drinking alcohol in our state, the minor could face consequences that go well beyond a criminal charge. As we discuss below, a charge and conviction could also affect the minor’s ability to pursue future education and career opportunities.

However, if you or your child recently received a citation for underage drinking in New Jersey, don’t give up hope. Instead, get help from an experienced DUI lawyer who has handled underage drinking cases as both a prosecutor and as a criminal defense attorney. Contact attorney Jason A. Volet today. He will review your case in a free and confidential consultation and work with you to craft a strategic defense.

What Penalties Could a Minor If Convicted Of an Underage Drinking Offense.

If convicted of the offense, which is the equivalent of a misdemeanor, the minor could face direct penalties that include:

The minor is not the only one who could be in trouble for underage drinking. Under N.J.S.A. 2C:33-15(e) and 33:1-81.1a, the parent, guardian or other person with legal custody of a person under age 18 who is convicted of underage drinking can also face a fine of $500 if the minor is subsequently convicted of the offense, and the prosecutor presents evidence that the person “failed or neglected to exercise reasonable supervision or control over the conduct” of the minor.

Does an Underage Drinking Offense Go on a Minor’s Record?

Underage drinking is a crime. Just because a person is a minor when an offense occurs, it does not mean that he or she will be spared a lifetime of potential negative consequences for his or her actions. Under limited circumstances, options may be available down the road for getting a charge expunged. With that said, the risk of getting a conviction on one’s record makes it important to wage a strong defense now if you or your child has been charged with underage drinking.

Other Consequences for Underage Drinking in New Jersey

Other intangible issues come with a criminal conviction such as the social stigma which attaches to it. Plenty of people will view a conviction as a moral failing or evidence that a young person is not fit for accepting responsibilities. While this view may be an unfair one, it is simply one of the harsh realities that a young person must face if he or she is convicted of underage drinking.

Defenses to Prosecution for Underage Drinking in New Jersey

In a few situations, an underage individual could be either exempt from the ban on possession of alcohol by a minor or immune from prosecution. Those situations are:

Public policy supports these rules. After all, we want minors to work and receive job training. Additionally, we want to encourage minors to “do the right thing” and get medical attention for a friend in need – even if the minor may have initially made a poor choice.

How Can a New Jersey Underage Drinking Defense Lawyer Help?

At The Law Office of Jason A. Volet, we aggressively protect the rights of those who have been charged with underage drinking. Some of the steps that we can take on behalf of you or your child are:

Don’t look back years later and regret your decisions after an underage drinking charge. Contact us for a free case review and get an aggressive criminal defense law firm on your side today.

What is the Difference Between a Misdemeanor and an Indictable Offense?

Misdemeanor and indictable offenses differ in the severity of the charge. A misdemeanor is a less severe offense that may include the following penalties if you are convicted: Jail time Fines Probation Community service Education or treatment programs Indictable offenses…