Can You Go to Jail for Shoplifting in New Jersey? 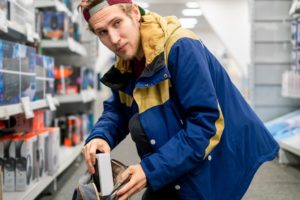 Shoplifting is not a minor offense in New Jersey. If you are convicted of shoplifting, you face a serious risk of going to jail. It will depend on the circumstances of the charge, including whether:

Jason A. Volet is a former prosecutor and an experienced Monmouth County theft defense lawyer. He understands that the stakes are high if you are charged with shoplifting. He can provide a free consultation and begin working on a defense strategy for you right away. Contact us now at The Law Office of Jason A. Volet to discuss your case in a free consultation.

Can a Store Detain You If You Are ‘Caught’ Shoplifting?

Stores in New Jersey – from big-box retailers like Wal-Mart to neighborhood convenience stores – are taking an increasingly aggressive approach to shoplifting. They now commonly use surveillance cameras, undercover security guards and anti-shoplifting chips or tags to try to catch shoplifters and prevent losses.

If a store believes it has caught you in the act of stealing items, the store can lawfully take you into custody under New Jersey’s shoplifting statute (N.J.S.A. 2C:20-11). The law allows the store to detain a suspected shoplifter “in a reasonable manner for not more than a reasonable time” in order to recover any merchandise. Typically, after a store recovers the property, the store will call the police.

Keep in mind: An arrest is not a conviction. You can fight the charges against you. With the help of a knowledge criminal defense attorney, you may be able to get your shoplifting charge dismissed or reduced and, ultimately, avoid any jail time.

What Is the Full Retail Value of the Item or Items Involved?

If you are charged with shoplifting, your risk of incarceration – and the potential length of your sentence – will depend on several factors, including the “full retail value” of the item or items which you are accused of shoplifting. The full retail value is a store’s stated or advertised price for an item. In short, the more expensive an item is, the more serious the shoplifting charge will be in New Jersey. Under N.J.S.A. 2C:20-11:

If you are accused of stealing more than one item, a prosecutor can add up the full retail value of all of those items in order to determine the grade of offense.

Were You Accused of Shoplifting as Part of a Retail Theft Enterprise?

Another important factor when it comes to determining imprisonment in New Jersey shoplifting cases is whether you were allegedly engaged in an “organized retail theft enterprise.” The law defines such an enterprise as “any association of two or more persons” for the purpose of transferring or selling shoplifted merchandise.

If you are found to have engaged in an organized retail theft enterprise, you could face:

In other words, depending on the full retail value of the merchandise involved in your case, you could face as few as three years and as many as 10 years of imprisonment if you are convicted of this type of shoplifting charge.

Are You Facing a Third or Subsequent Shoplifting Charge?

Your prior record also plays a role in the incarceration that you could face if you are charged with shoplifting in New Jersey. Under N.J.S.A. 2C:20-11, any person who is convicted of a third or subsequent shoplifting offense must serve a minimum term of 90 days of imprisonment. In other words, you cannot avoid incarceration.

Can a Shoplifting Charge Lead to Other Consequences?

In addition to the risk of going to jail, you can face many other consequences if you are convicted of shoplifting in New Jersey. Some of the direct consequences include:

With that said, if you are a first-time offender, you may be eligible for a Pretrial Intervention Program (PTI). This program provides a way for low-level offenders to avoid a conviction if they attend counseling, perform community service and meet all other conditions.

Get Help from an Experienced NJ Shoplifting Defense Lawyer

If you have been charged with shoplifting in Freehold, Neptune or anywhere else in New Jersey, start your defense right away. Contact attorney Jason A. Volet today. He can provide the experienced, aggressive legal defense that you need during this difficult time, and he will work tirelessly to protect your rights and seek the best possible outcome in your case.

Why Choose an Attorney Certified by the Supreme Court of New Jersey as a Criminal Trial Attorney?

Choosing a lawyer to represent you when you have been charged with a crime will be one of the most important decisions you will make. You may ask yourself, how do I decide? You need to make sure that the…