What Should I Expect If I’ve Been Accused of Identity Theft? 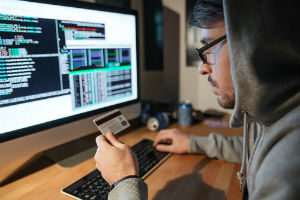 Being accused of identity theft isn’t a life-or-death issue, but it’s close. Conviction can yield serious prison time, fines, and an order for restitution of victims’ losses, court costs, and expenses for clearing credit histories – which can far exceed any fine the court may levy. After the conviction, the perpetrator remains a target for civil action by victims.

If you’ve been accused of identity theft, you need someone on your team who has a solid track record of defending clients from criminal charges. At The Law Office of Jason A. Volet, our dedicated New Jersey ID theft attorney has handled more than 2,000 criminal cases and is former prosecutor for Monmouth County.

Schedule a free and confidential case consultation with our team today, and learn how we will build a solid ID theft defense strategy for you. Call or fill out our online form to get started.

What Is Identity Theft?

Identity theft is a crime committed against about 9 million Americans every year, according to the Federal Trade Commission. It involves the use without permission of someone’s personal information, such as a credit card number or Social Security number, to commit fraud. That information can be used to open credit card and bank accounts and other lines of credit to fraudulently make purchases or obtain money or services.

The state has varying burdens of proof for these scenarios, each of which is a disorderly persons offense punishable by up to six months of incarceration and victim restitution. A variety of circumstances can elevate the crime to a fourth-, third-, or second-degree violation carrying far more significant penalties.

The money or value of items or services obtained through identity theft, the number of victims, and the accused person’s criminal record will dictate the penalties faced for identity theft crimes:

It’s worth noting that a minor who flashed someone else’s identification to buy alcohol or some other age-restricted product or service is not subject to these identity theft laws.

Any intangible or tangible device or card can qualify as a credit card if used to obtain anything of value, and credit card theft can range in severity from a misdemeanor to a felony. Here are some versions of credit card fraud, typically a fourth-degree crime punishable by up to 18 months in prison and a fine of up to $10,000:

Contact The Law Office of Jason A. Volet for an experienced New Jersey Identity Theft Attorney

Identity theft and credit card fraud are serious offenses that can yield severe prison time and crushing financial costs. Don’t take any chances with your defense. Discuss your case with the experienced ID theft defense attorney at The Law Office of Jason A. Volet today.

Contact our Freehold or Neptune office to schedule a free initial consultation with a skilled criminal defense attorney.

Penalties for Possession of Heroin