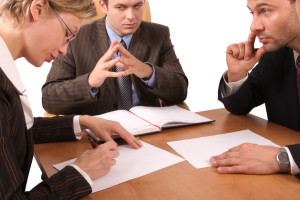 Let’s say that your case is headed to trial. As your New Jersey criminal defense attorney, you and I have been in constant communication about what the best course of action is. We have considered your defense. We have examined all of the facts of your case. We have looked at your record. We have discussed what the prosecution is likely to offer. We are ready.

We might come to an agreement with the prosecution about what charges you’ll actually plead guilty to and what sentence you’ll receive. This is called a “stipulated sentence.” The judge takes your plea and imposes the agreed-upon sentence.

Another scenario is that you and I and the prosecution are unable to agree on what sentence should be imposed, but we agree on what your plea is. This is known as “charge bargaining.” In this case, the judge will take your plea and hear all of the evidence at a sentencing hearing. The sentence will be pronounced by the judge.

The last scenario involves a little bit of both. You and I and the prosecution agree on what your plea will be and then maybe will impose limits on the sentence that can be handed down by the judge. For example, we might all agree that probation is the best sentence, but the length of that probation would be left up to the judge.

In each of these situations, the only way we can bargain at all with the prosecution is if I know all of the facts of your case.

For a free initial consultation, please give me a call. Once I have had an opportunity to learn about your case I can then explain the best options available.