Am I Allowed to Carry a Weapon? 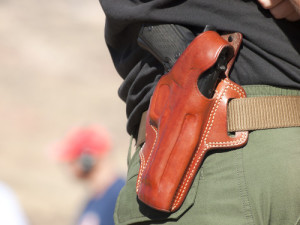 To answer this question, you first have to narrow your definition of “weapon.” There are laws regarding carrying a concealed handgun, which require carriers to have licenses for such a weapon, but it is not always legal to carry any weapon of your choice. Also, your location can affect the legality of possessing a weapon.

As a New Jersey gun possession lawyer can explain to you, carrying a handgun out in the open, or “open carry,” is illegal in our state. Carrying a concealed gun, or “concealed carry,” is legal only if you have a permit to carry a handgun. New Jersey law does not recognize gun permits or licenses from other states.

In order to legally carry a concealed handgun, you must ensure that you have done the following:

Concealed weapons laws vary from state to state and it is important that you understand your individual rights. If you or someone you know has been charged with illegally carrying a weapon, contact the experienced New Jersey criminal defense attorneys of the Law Office of Jason A. Volet today at 732-503-8968.

This informational blog post was brought to you by Jason A. Volet, an experienced New Jersey Gun Possession Lawyer.

Consequences for a Third DWI Offense in New Jersey

If this is your third or more DWI, the penalties that you face in New Jersey are as significant as they possibly could be for a motor vehicle ticket. You are facing a mandatory ten years loss of license, you…